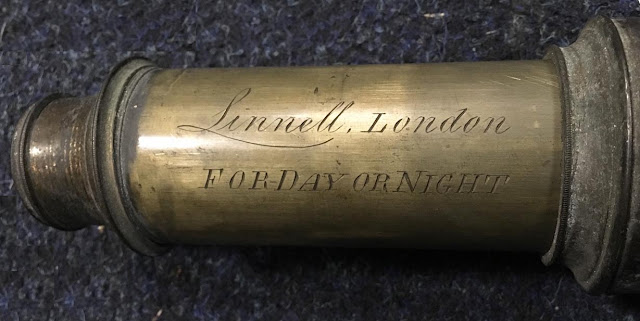 The contribution the Linnell family of London had in the world of optics and telescopes has been generally overlooked.   This short summary hopefully will shed some light on the Linnell family’s involvement in the early 17th century with the development of the modern telescope. *Note* This Linnell family has no documented kinship with Robert Linnell the immigrant to Plymouth Colony, but likely a distant relative that originated in Northamptonshire.

“The history of the telescope can be traced to before the invention of the earliest known telescope, which appeared in 1608 in the Netherlands, when a patent was submitted by Hans Lippershey, an eyeglass maker. Although Lippershey did not receive his patent, news of the invention soon spread across Europe. The design of these early refracting telescopes consisted of a convex objective lens and a concave eyepiece. Galileo improved on this design the following year and applied it to astronomy. In 1611, Johannes Kepler described how a far more useful telescope could be made with a convex objective lens and a convex eyepiece lens. By 1655, astronomers such as Christiaan Huygens were building powerful but unwieldy Keplerian telescopes with compound eyepieces.

Isaac Newton is credited with building the first reflector in 1668 with a design that incorporated a small flat diagonal mirror to reflect the light to an eyepiece mounted on the side of the telescope. Laurent Cassegrain in 1672 described the design of a reflector with a small convex secondary mirror to reflect light through a central hole in the main mirror.

The achromatic lens, which greatly reduced color aberrations in objective lenses and allowed for shorter and more functional telescopes, first appeared in a 1733 telescope made by Chester Moore Hall, who did not publicize it. John Dollond learned of Hall's invention and began producing telescopes using it in commercial quantities, starting in 1758.” (The previous three paragraphs were taken from Wikipedia)

Elijah Linnell was born in 1705, the son of Robert Linnell a Tallow Chandler from Duston, Northamptonshire (near Kislingbury), who apprenticed under William Haydon in London in 1679.  Elijah was a bound apprentice under Spectacle Maker Thomas Archer in 1717.  Mr. Archer was a member and later Master of “The Worshipful Company of Spectacle Makers”, a Guild founded by King Charles in 1629 purposed to set regulations and standards for optical devices.   After Elijah’s apprenticeship he married Elizabeth Lindell in 1725.  The couple had seven recorded children; Robert bap. 1727, Elizabeth bap. 1729, Joseph the elder bap. and died 1731, Joseph the younger born after 1731, Susanna bap. 1733, George born about. 1739, and Dewe who died in 1738.  Elijah died young in 1740, leaving a widow and many children.  Three of Elijah’s children followed him in his trade.

Robert Linnell the eldest child of Elijah, apprenticed in the Spectacle Makers' Company in 1747 and became free on Oct. 3, 1754.  Robert apprenticed his brother Joseph from 1754-1756 and another Joseph Linnell in 1774 who was either a son or nephew.

Joseph Linnell apprenticed to James Ayscough prior to 1754.  James Ayscough was a brilliant optician specializing in microscopes and barometers.  Ayscough was apprenticed to optician James Mann from 1743 to 1747, created the compound drum microscope, and apprenticed under Thomas King and Sir Isaac Newton.  After his initial apprenticeship with James Ayscough, Joseph was turned over his brother Robert Linnell on Oct. 3, 1754, and later was turned over to Avis Sterrop, June 28, 1756.  When Avis died, he was turned over to Avis’s wife Mary Sterrop on Oct. 1, 1760.  Joseph became free of the Company on June 30, 1763 and took over the shop of his previous master James Ayscough in St, Giles, Cripplegate at 33 Ludgate Street, near St. Paul's.  The shop was well-known due to its elaborate sign with large spectacles "The Original Shop for Crown Glass Spectacles"

Linnell was proficient in building achromatic telescopes as early or before 1758, a skill he learned from Ayscough who invented the first working achromatic doublet lens with Chester Moor Hall based on ideas from Sir Isaac Newton.  An achromatic lens is “specially designed to control the effects of chromatic distortion or aberration (a defect of optical lenses to bring the focus of all colours to the same convergence point) is called an achromatic lens.”  In 1758, John Dollond, an English optician, discovered a way to eliminate chromatic aberration and patented the process.  He combined two lenses, one converging, the other diverging, to make an achromatic doublet. The two lenses in an achromatic doublet are made of different type of glass with indices of refraction chosen such that the combination brings any two chosen colors to the same sharp focus.   Joseph Linnell petitioned against the patent in 1764 but lost.  Joseph died after 1775 and his apprentice John Gilbert took over the business. 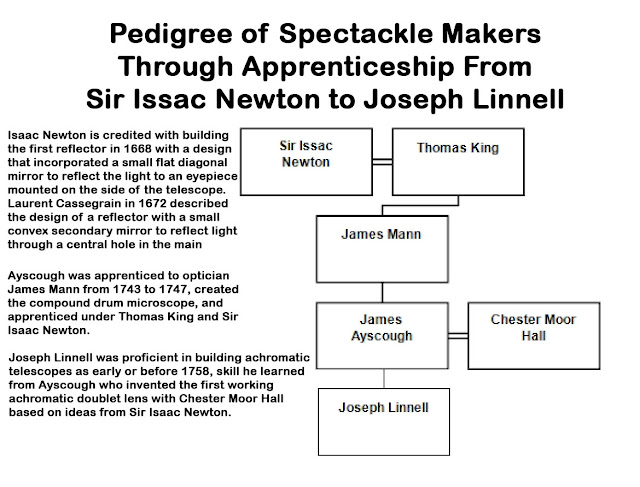 .George Linnell became free of the Spectacle Makers' Company by Sept. 12, 1769.  He had a shop on Goldsmith Street near St. Gough Square in London.  After the Dolland achromatic telescope patent expired in 1772, George started to make telescopes just like his brother did.  One of George’s apprentices was Edward Dixey, who trained with George from 1771 to 1778.  Dixey later succeeded the Company Fraser and Son in 1817 and that was succeeded by George and Charles Dixey who were sons or nephews.  Fraser and Son was started by William Fraser in 1777 as an optical and mathematical instrument company. Fraser's talent was recognized by King George III of England and was granted Royal Warrants and commissions.
When Charles Wastell Dixey and his uncle acquired the business. Over the next century the family proudly served as optician to the King or Queen of England and created one of London's most distinguished companies. C.W. Dixey & Son has served seven successive kings and queens of England, and the royal houses of nine nations. The company has been awarded the following Royal Warrants, which serve as marks of distinction.
George III 1796
George III 1812
George IV 1824
William IV 1830
Duchess of Kent 1832
Queen Victoria 1838
Prince Albert 1840
Prince of Wales 1863
Queen Victoria 1880
Queen Victoria 1893
Edward VII 1901
Queen Alexandra 1901
George V 1910
Queen Mary 1940
George VI 1940