This thread is to show the medieval roots of a member of the Linnell family and how genealogy can link us to the distant past.  We can show that Hannah Scudder has researched and documented ancestry back to the time of William The Conqueror’s invasion of England and Domesday.  This is not a line to Royalty but a line that weaves into the heart of families that produced household Knights that fought and led battles at Bannockburn, Crecy, Hastings, and Brittany. 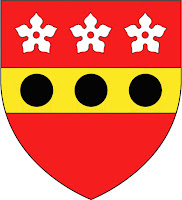 John Scudder (Sr) was born probably at Horton Kirby, Kent, say 1590, and died, probably at Strood, Kent, in 1625 or 1626.  He married at Maldon, Essex, in 1613, Elizabeth Stoughton daughter of the Rev. Thomas Stoughton. As Mrs. Elizabeth Scudder, widow, she married secondly, at Strood, Kent, "the last daye of Aprill 1627, Mr. Robert Chamberlayne Pastor of the Parrishe of Stroud," The record of the marriage states that Elizabeth was the daughter of “the Rev'end Divine that was, Mr Thomas Stoughton." Thomas Stoughton received his M.A. from Queen's College, Cambridge, in 1580, and was vicar of Coggeshall, Essex, from 1600 to 1606. He was father also of Thomas' and Israel Stoughton, who came to New England in 1630 and 1633.  -   Jane Fletcher Fiske, F. A. S. G., A New England Immigrant Kinship Network, Notes on the English Origins of the Scudders of Salem and Barnstable, Massachusetts, The American Genealogist, Vol 72 (Jul-Aug 1997) pgs. 285-300 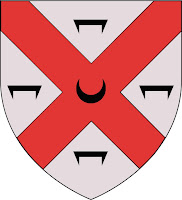 Four children of the nonconforming English minister Thomas Stoughton immigrated to New England between 1630 and 1644: brothers Thomas and Israel and their sisters Judith (Stoughton) (Denman) Smead and Elizabeth (Stoughton) (Scudder) Chamberlayne. The Rev. Thomas Stoughton was the only son of Francis, the short-lived son of a Kentish gentleman named Edward Stoughton by Edward’s first wife Mary Exhurst, daughter of Richard Exhurst. The Stoughton family was the subject of a monograph based on the research of Ethel Stokes of London, but that work did not explore Mary Exhurst’s medieval ancestry. 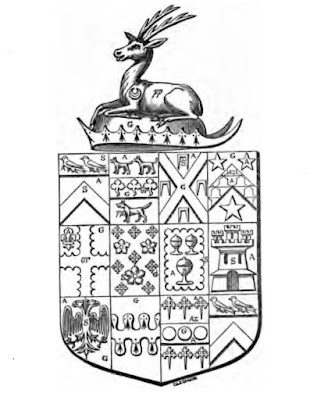 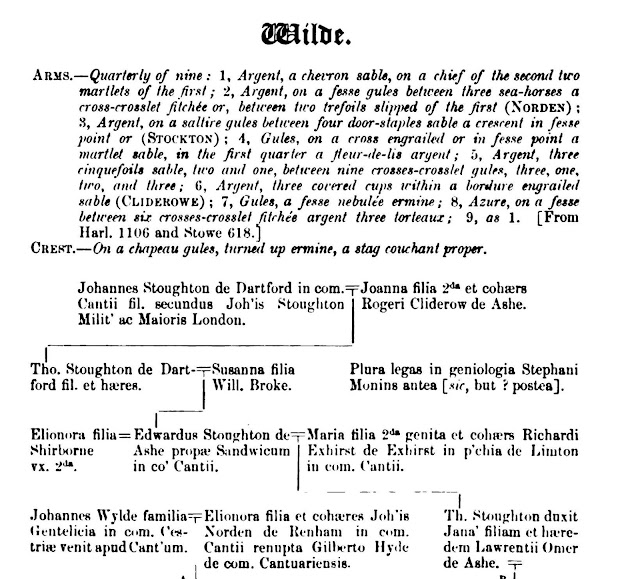 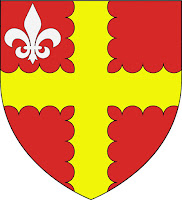 Using contemporary accounts of the Exhurst family, we present evidence that Richard Exhurst’s first wife Alice was the daughter of Richard and Alice (Brudenell) Waller and that Richard Exhurst’s second wife Joan Roberts was the mother of Mary (Exhurst) Stoughton. Joan’s father Walter Roberts had three wives over a period of nearly sixty years: Margaret Penn, Isabel Culpeper, and Alice Naylor. We review the ancestry of Walter Roberts and his three wives and present evidence concerning the chronology of Walter’s marriages and the identification of Joan’s mother.  - THE EXHURST ANCESTRY OF THE STOUGHTON SIBLINGS OF NEW ENGLAND Adrian Benjamin Burke, John Blythe Dobson, and Janet Chevalley Wolfe, The New England Historical and Genealogical Register 165,166 (Oct. 2011 pgs. 246-260, Jan. 2012 pgs. 46-70) 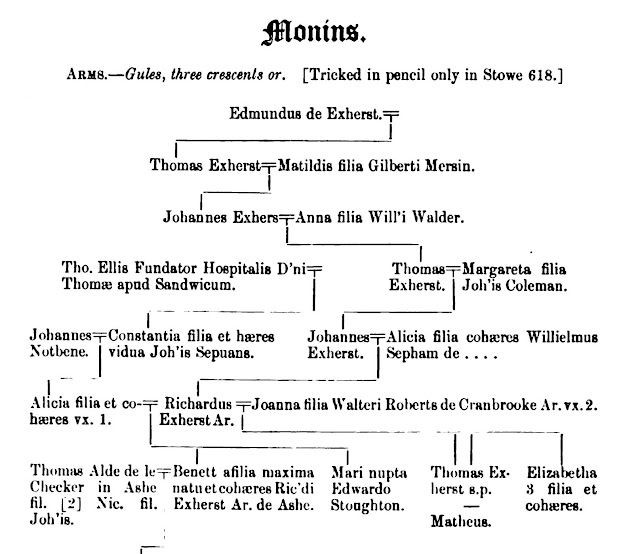 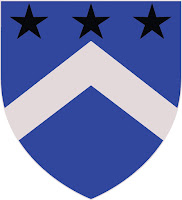 The 1592 and 1629 Roberts pedigrees state that Walter and his first wife Margaret Penn were married October 23rd 1463 and that Margaret died May 6th 1480.  Walter Roberts’ second wife was Isabel, daughter of Sir John Culpeper of Bedgebury in Goudhurst and his wife Agnes, who was the widow of Richard Wakehurst and likely the daughter of John Gainsford. The 1592 and 1629 Roberts pedigrees supply a marriage date, St. Edmund’s Day, 20 Edward IV (Nov 20th 1480), for the marriage of Walter Roberts and Isabel Culpeper, and the 1592 pedigree states Isabel died on  January 17th on 6 Henry VII [1490/1].

Walter and his third wife Alice Naylor were married February 18th on 7 Henry VII Naylor, “alderman, citizen, and tailor of London,” and his wife Elizabeth, whose fourth husband was George Nevill, Lord Abergavenny. The 1619 Kent visitation confuses Walter’s third wife Alice with her mother even though the 1574 visitation identifies Alice correctly.

[1491/2], about a year after Isabel’s death. Alice was the daughter of Richard. The following transaction evidences a relationship between Richard Exhurst and both the Wallers and the Culpepers at about the time Richard married Joan Roberts.  On November 14th 1506, “Richard Guldeford, knight, Benedicta Isaak, John Botiller, serjeant-at-law, John Waller the elder, esquire, John Waller the younger, esquire, William Isaak, esquire, John Crowmer, esquire, John Crafford, esquire, Richard Exherst and John Hales, gentlemen” were enfeoffed by “Richard Culpepir the elder, esquire” in most of the manor of Shorne (near Rochester), Kent, and by “Walter Culpepir, esquire, and John Herenden, ‘gentilman’” in most of the manor of Traseis (i.e., Tracies, in the parish of Newington), Kent. Of the two John Wallers in the list of feoffees, the elder was the uncle of Alice (Waller) Exhurst, while the younger was her brother. Sir Richard Guildford and Bennett Isaac were the adult children of Sir John and Alice (Waller) Guildford. This Alice was the paternal aunt of Alice (Waller) Exhurst. The two Culpepers were closely related to Walter Roberts’ second wife Isabel Culpeper, as Richard Culpeper the elder was Isabel’s uncle and Walter Culpeper was her brother. Richard Exhurst’s interaction with close relatives of Isabel Culpeper supports the inference that Isabel Culpeper, not Margaret Penn, was the mother of Joan Roberts.

The evidence discussed above suggests Walter Roberts’ second wife Isabel Culpeper was likely the mother of Joan (Roberts) (Exhurst) Horden but does not definitively disprove the claim that Joan’s mother was Margaret Penn. We note, however, that while the 1592 and 1629 Roberts pedigrees both explicitly state that Joan was the daughter of Margaret Penn, other apparent errors in these pedigrees suggest that the compiler was not fully informed about the relationships in this generation.   - THE EXHURST ANCESTRY OF THE STOUGHTON SIBLINGS OF NEW ENGLAND Adrian Benjamin Burke, John Blythe Dobson, and Janet Chevalley Wolfe, The New England Historical and Genealogical Register 165,166 (Oct. 2011 pgs. 246-260, Jan. 2012 pgs. 46-70) 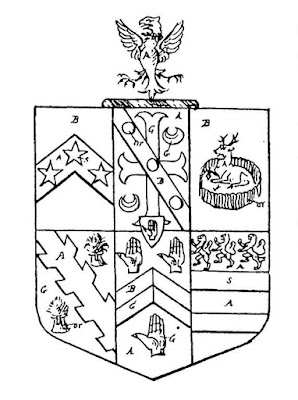 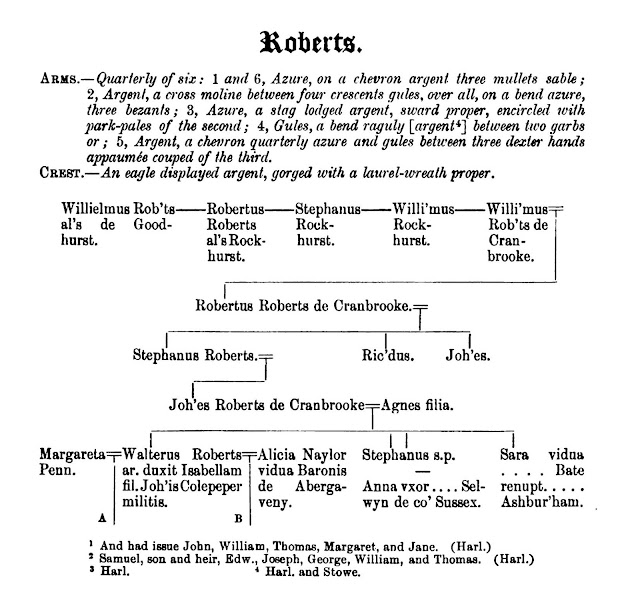 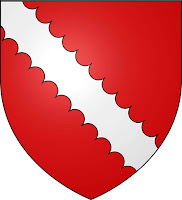 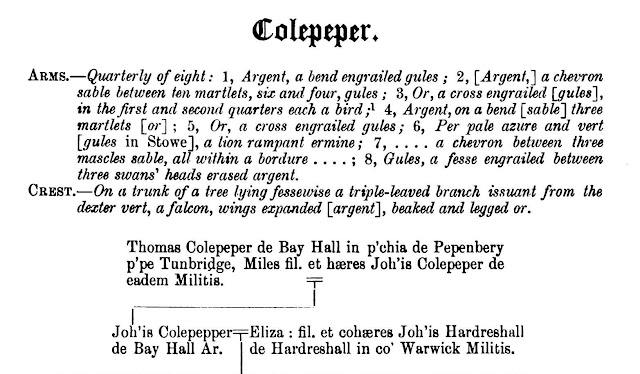 Sir John Hardreshull can trace his family to Domesday and was Knight who was descended from household Knights.  The Hardreshull’s got their name from Hartshill, Warwickshire, a strategic manor-fort given to Hugh the Falconer by the Earl’s of Chester about 1120.  Hugh assumed the name Hardreshull after the town he governed.  John Hardreshull was the grandson to the Knights de Neville of Scotton, Lincolnshire and Baron Eustace de Hacche a household Knight of King Edward I.  Dudding, Reginald C, History of the Manor and Parish of Saleby With Thoresthorpe In the County of Lincoln, With Some Owners. (Horncastle: W. K. Morton & Sons ,1922) pgs. 1-54

Ascendancy Tree From Thomas Culpeper and Joyce de Cornerth to about 1000 A.D. 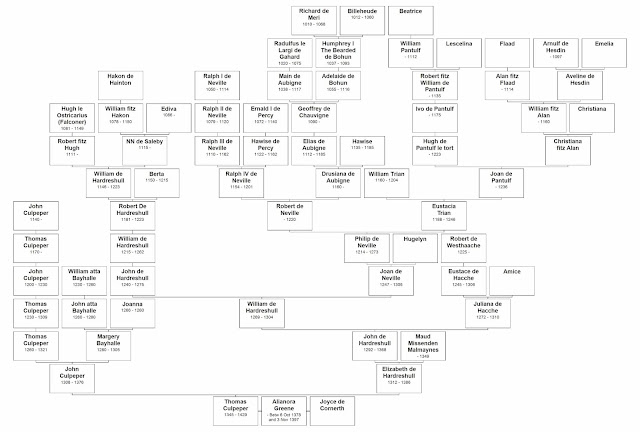