Donate to the Orleans Historical Society

After a unanimous vote this week, the Orleans Historical Society has begun to negotiate a purchase and sale agreement with the owners of the Captain Linnell House.

“The Captain Linnell House represents a unique opportunity to preserve an historic landmark that has plenty of space to display our local history collections well into the future,” said Kathleen McNeil, historical society executive committee member and chairman of the board’s Linnell subcommittee.

“In addition, the size and quality of the function room, with two licensed kitchens and space for up to 200 guests, is unmatched in the area and will provide revenue to operate the facility and maintain our current 1834 Meetinghouse and Hurd Chapel.” 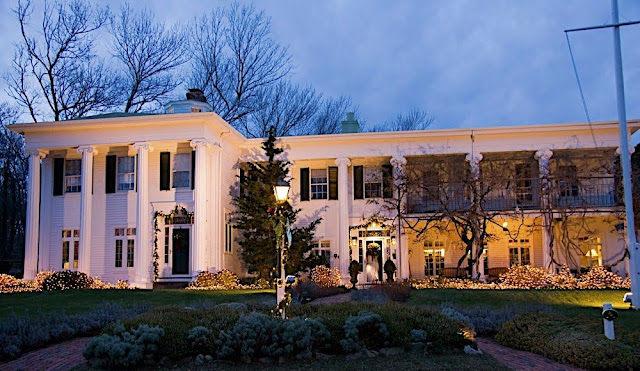 The historical society plans to preserve the 1840s sea captain’s home, at 137 Skaket Beach Road, as a museum as well as operate revenue-generating special event space for the benefit of Orleans residents and visitors. Until the transaction is completed in three or four years, owners William and Shelly Conway will continue to operate the facility as a restaurant and popular venue for weddings and other special occasions.

McNeil said that for years the historical society has been searching for a viable solution to its serious lack of space and the challenge of properly preserving and displaying current and future Orleans artwork, antique furniture, ship models, archives, photos, maps and other items entrusted to its care. It has looked at the possibility of occupying other historic buildings or moving them to a site adjacent to its River Road property. All of these options presented their own logistical and financial challenges, and none had good potential for sustainable revenue generation.

“The Captain Linnell House is essentially turn-key for us as a museum and community center,” McNeil said in a statement. “We visited several other non-profit organizations on the Cape that have similar revenue sources, and we have developed a business model that will work for us and the community.” Now, she said, the society will begin fundraising. The sale price being negotiated hasn’t been disclosed; the property is assessed at $783,600. “The Conways have said they want us to be the next caretakers of the house, and we are very pleased and excited to have that opportunity,” she added.

Captain Ebenezer (“Eben”) Linnell, born in 1811 on Barley Neck Road in Orleans, married Rebecca Crosby in 1835 and had a traditional Cape Cod home built for her on the present Captain Linnell House site. Later he saw a French-designed, neo-classic villa built for a shipping agent friend in Marseilles and brought back the plans to build the exact replica that stands today. 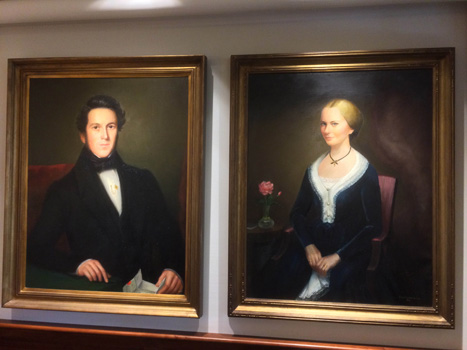 Linnell died at sea in 1864 and, after several owners and various uses, the house fell into disrepair. Under the ownership of the Conways, who bought the property in 1988, the building has been restored as the classic, mid-1800s clipper-ship captain’s mansion it once was. A Cape Cod landmark, the house is listed on the Massachusetts Register of Historic Places.

Go to OrleansHistoricalSociety.org for more information, or call 508-240-1329.

By 1853 Eben had already distinguished himself in the cotton trade as Captain of the Cabinet and the Buena Vista. When the Eagle Wing was launched by James Curtis in his ship building yard at Medford, MA, Captain Eben was promoted to the command of this sleek and beautiful ship. He took her out of Boston, MA on her maiden voyage on December 20, 1853 headed for San Francisco, CA and voyage of two years that would test both his skill and the seaworthiness of his ship. 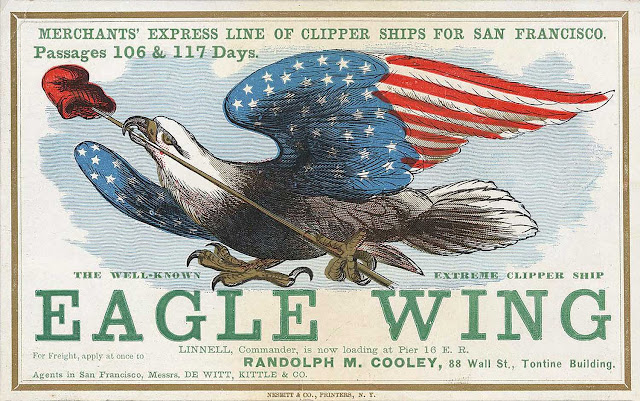 Just four days out of Boston he ran into a hurricane in the North Atlantic that even Captain Eben said was more severe than any typhoon or hurricane he had ever witnessed. Two men were washed overboard and only one could be saved. In spite of this beginning though, he reached San Francisco in 105 days, and from there headed for China in the Spring of 1854 and a consignment of tea for London. He left Foo Chow on 31 July 1854, survived a typhoon that nearly wrecked him again, and limped into the Thames in 113 days without a mizzen mast. His repair bill was high, 1470 pounds sterling, but so was his profit. His consignment of 1308 tons of tea could be sold at eight pounds sterling a ton. 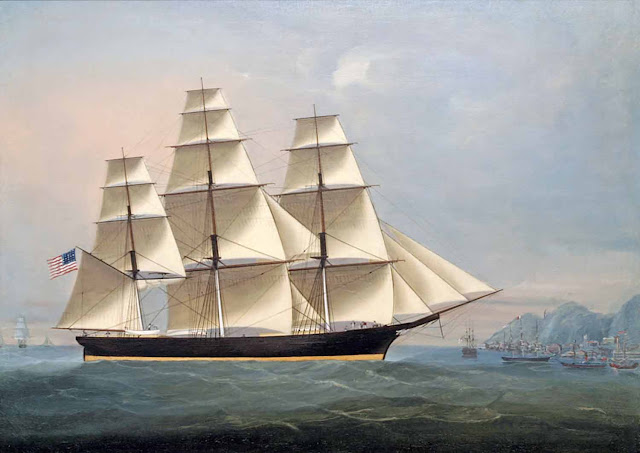 Captain Eben’s next two trips are those that cemented his reputation and that of his ship. He left London on 17 April 1855 and arrived at Hong Kong 10 July after just 83 ½ days, a record at which later clipper ships were to shoot in vain. His return trip was to New York and that was accomplished in 86 days, another remarkable record. On this trip he passed both the Joshua Bates and the Romance of the Seas. 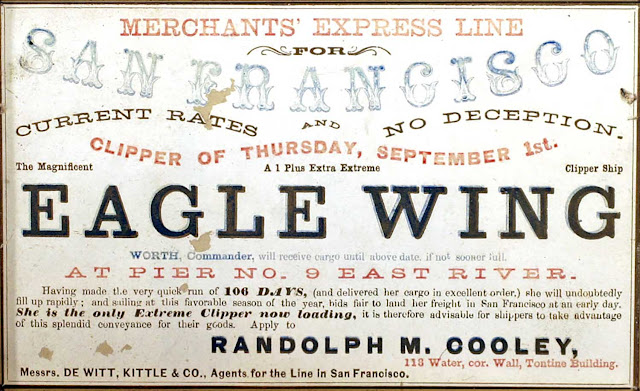 He had been away from home two years and two months. In his well-earned vacation of nine months he invented an improvement on the top sail rig that was to increase performance of the clippers and was used by sixty-four vessels, including a number of Shivrick-built ships, soon after it was patented.
It was about 1860 that Captain Eben commissioned his father-in-law Edmund Crosby to build a French style villa on the site of the Cape Cod house that had been built for his bride Rebecca Crosby in 1835. The new home was to be a duplicate of a house he had seen in Marseilles in 1850 and was owned by his shipping agent. His home was a delight to him and continues to this day to delight those who visit its rooms and eat the gourmet cuisine of the Captain Linnell House Restaurant on Namskaket Road in Orleans, MA. 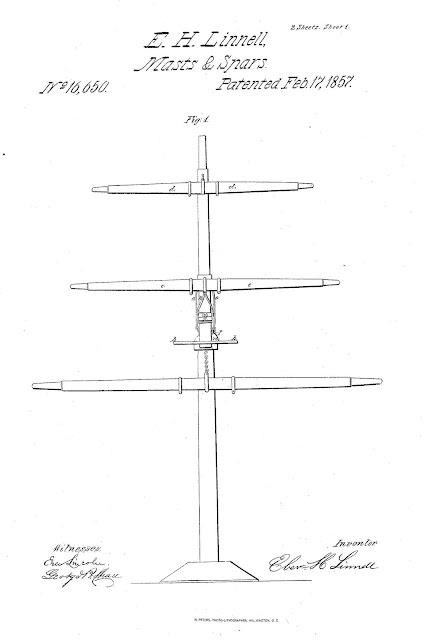 In 1856 the chases invited Captain Eben to take command of their new clipper, the Flying Mist. His voyages on this ship took him first to San Francisco, then to Valparaiso, Chile, then to Caldera, also on the coast of Chile. On this last leg he rescued all on board a yacht that was in distress and won the great devotion of the gentlemen who were rescued. From Chile he returned to the Chesapeake Bay on 23 Aug, thence to Singapore and Hong Kong and back to New York by way of Manila in time for Christmas, 1858 in Orleans. 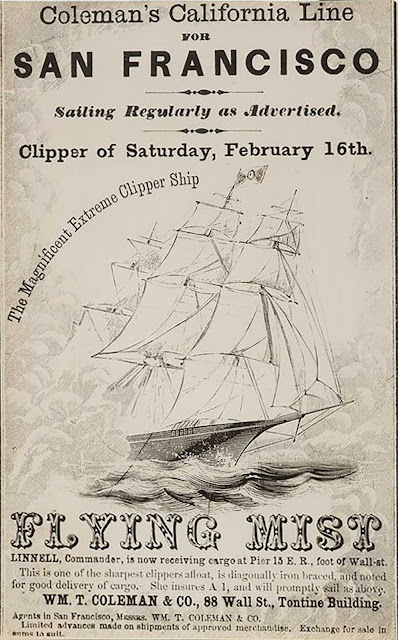 It was while in Hong Kong at thanksgiving time, 25 November 1859, and waiting for a cargo, that Capt. Eben gave a much-remembered ball on board ship. Invited were all in port form the Governor to the ship masters with their wives, and the report was of very splendid occasion.

On another tour he departed Hong Kong for San Francisco then picked up a load of guano from Baker's Island in the Pacific to be deposited in New York. For the next year he remained at home with his wife and three daughters in Orleans, MA.

On his next voyage on the Flying Mist he ran into unexpected difficulties. He had picked up the Flying Mist in London in February, 1862, took her to Glasgow and there loaded her with 1760 sheep and 18 shepherds to look after them in route for New Zealand. He made the trip in 81 days and picked up a pilot at Bluff Harbor. The ship dragged both anchors with which she was secured, rammed into a rock, and became a total loss. A subsequent investigation found no explanation for the disaster.

He returned to the command of the Eagle Wing in 1863 and on a trip to San Francisco in 1864 in a squall, he was caught in a bight of the spanaker-boom vang while the sail was jibing and was dashed against the spokes of the wheel. Critically injured, he lived only a few days.  For native ability, energy, and shrewdness, few American shipmasters were his equal. (Kettridge, Henry C., Shipmasters of Cape Cod, Houghton Mifflin Co., 1935, pp.199-205).

The Wills of Robert & David Linnell