Alfred Linnell and how he fits into the Linnell Family has been been an unsolved mystery for over 25 years.   In earlier Linnell Family Newsletters this mystery was acknowledged a couple times. “The ancestry of Alford (or Alfred) Linnell of Anna, IL and his wife Amanda has yet to be discovered and connected to our Robert Linnell family.” (Linnell Family Newsletter Vol. 3 no. 1 April 1991)  “Cecelia Linnell seeks information about the parents of Alfred Linnell. A marriage certificate shows his marriage in Illinois to Amanda Austin on November 12,1877.  At that time, he was 57 years old. The 1880 census finds him, age 59, in Greenville, MS with his 11 year old son, Alfred D. Linnell. Much is known about this family line to the present date.  We need the connecting links to Linnell roots.” (Linnell Family Newsletter Vol. 10 No. 2 May 1998)

The information presented below is all the known info of Alfred Linnell Sr. and his son Alfred Linnell Jr.  It is the author's opinion that Alfred is more than likely from the same extended family.   Either from the families of Maine, Massachusetts, New York, and most likely, farther back to England. If anyone has more information about Alfred please reach out to the author at historian@linnellfamily.com

The earliest record we have of Alfred Linnell is first marriage record from 1842  "m on Mon evening by the Rev. J.T. Arnold, Alfred Linnell to Miss Louise Polleys, both of this place. Joy be with them; and may the honey-moon endure as long as will our recollection of the good things that accompanied the notice." -  (May 19th Chemung County Newspaper Abstracts 1842 From Marriages and Deaths Elmira Republican, Elmira Gazette,Elmira NY Abstracted by Isabell Rydel and retyped by Diane Bender)

Louisa Polleys born March 14th, 1821, the daughter of Thomas Polleys and Mary Sargent of Malden, Massachusetts. Thomas died before 1840 and Mary and Louisa had moved Elmira, Chemung, New York by the same time.

According to the 1850 Census in Elmira, Chemung New York,  Alfred Linnell a 30-year-old tailor was married to Louisa, aged 27 and had a two-year-old daughter Lilly.  The Census shows Alfred was born in New York, Louisa Massachusetts, and Lily New York.   Louisa died Sept 2nd, 1863 and is buried in Woodlawn Cemetery, close to her mother who died in 1851.  Louisa's tombstone says "Louisa wife of Alfred Linnell March 14, 1821 Sept 21, 1863". There were no other Linnell's in Chemung Co. New York at this time. 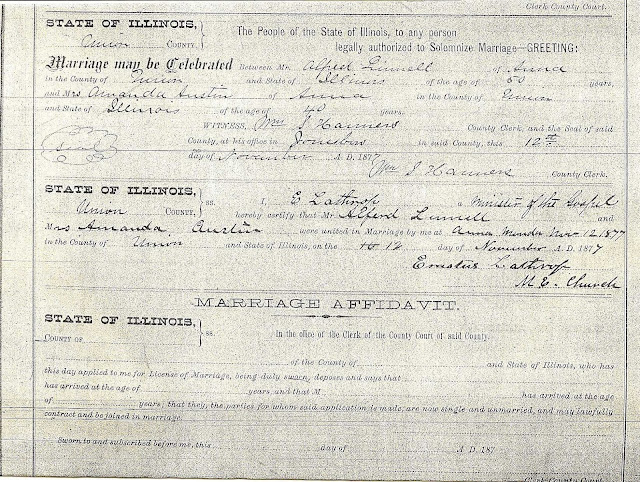 In the 1880 Census in Greenville, Washington Co. Miss. it shows Alf Linnell a widow and gardener b. about 1821 in New York living on Walnut Street with his son A.V?  b. about 1869 in Illinois.  The Census shows that Alfred's son was born in Illinois.  The most interesting thing about this census is that Alfred lists his parents as being born in England.

From the census and prior records we can see that Alfred David Linnell Jr. was born from an unknown second wife who married Alfred Sr. between 1863 to 1869 from Illinois and died before 1877.  Alfred's obituary helps us verify that his father was Alfred Sr. due to the fact he mentions growing uo in Greenville, Miss. and being born in Carbondale, Illinois.
"A. D. Linnell Dies Suddenly - Was Editor of this paper, has lived in Rosedale for more than twenty-five years. The sudden death of A. D. Linnell, editor of The Bolivar County Democrat, came as a great shock to the entire Rosedale community and to the county at large. He died Sunday afternoon, December 23rd, 1928, at 12:30 and was buried at the Rosedale cemetery Monday afternoon following ceremonies at the Methodist Church, of which he was a member. Reverends Campbell of the Methodist Church and Walker of the Baptist Church officiated. The active pall bearers were A. F. Goza, A. McInnis, A.T. Hall, Jr., Al Peskin, R. W. Rea, George McGee, and William Clay Roberts. The honorary pall bearers were: A. Y. Scott, W. B. Roberts, M. L. Kaufman, A. R. Shattuck, Joe Rubenstein, F. G. Paden, M. Aaronson, and J. L. Wilson. The funeral was attended by a multitude of friends who mourn his loss. In his death, his family lost a loving husband and father, his friends a true and loyal friend and his state and community a broad minded, liberal, charitable citizen who was a credit to his country. Mr. Linnell was born in Carbondale, Illinois and moved to Greenville at an early age. There he served his apprenticeship in the office of Capt. J. S. Neely, editor of the Greenville Times, who afterwards owned and edited the Vicksburg Herald, and Mr. Linnell loved to talk of that great man who was so well known and loved. He came to Rosedale twenty-five years ago as Editor of the Bolivar County Democrat and has built that paper into one of the outstanding weekly papers of Mississippi. He did not write many editorials, but when he did so, they were always filled with wisdom and charity and were widely copied throughout the State and often by outside papers. He was twice married, his first wife being Miss Belle Farmer of Greenville, Mississippi, who died at Rosedale leaving two sons, Renard Linnell now of Los Angeles, California; Finley Linnell, connected with the Third Mississippi River district, now located at Greenville, Mississippi and a daughter, Mrs. W. P. Belcher of Rosedale, Miss. His second wife is Mrs. Lois Linnell, formerly Lois McBroom, of Rosedale, Miss. A daughter of J. M. McBroom, formerly and for many years County Surveyor of Bolivar County, Mississippi and now Deputy Circuit Clerk of that county. The children of this marriage are Mrs. Louise Stapleton and John and Robert Linnell, of Rosedale, Mississippi and Mrs. Maud McCaleb of Cleveland, Mississippi. All of these children survive him. He lived an honest, industrious, charitable life and died in the midst of his family beloved by all. Peace to his ashes. Obituary" The Bolivar County Democrat Volume 13 Rosedale, Mississippi December 29, 1928

Hopefully over time more records will come to light to solve this mystery.


Other Records mentioning an Alfred Linnell

“Deed from Alfred Linnell to HC Williamson Dated 3 Dec 1866, Alfred Linnell, To Deed HC Williamson  Recd Dec 7th 1866 at 3 ¼ PM  This indenture, made this day of November in the year of our Lord, one thousand Eight Hundred and sixty six, between Alfred Linnell of the County of Dyer and state of Tennessee of the one part, and Henry Clay Williamson of the County of Dyer and State of Tennessee of the other part.  Witnesseth That the said Linnell for and in consideration of one thousand and fifty Dollars to him in hand paid by the said Williamson the receipt whereof is hereby acknowledged hath given, granted, bargained, aliened, conveyed and confirmed and by these presents doth give grant bargain, sell, alien, convey and confirm unto the said Williamson, his heirs and assigns forever one certain piece or parcel of land situated lying and being in the County of Dyer, state of Tennessee part of  Isaac Sampsons 643 Acre Grant.  Beginning at a stake John H. Christies South East corner on the east boundary of the Grant Running thence South 87 poles to a stake & pointers Thence west at a variation of 1 ½o 109 poles to a on WJ Carters line Thence North with WJ Carters line and passing this North corner 42 ½ poles to a stake Thence East ½o North 36 poles to a stake Blozabella Williams South East corner of her Ten Acres Thence North 1 ½o West 44 ¾ poles to a stake in John H. Christie's South boundary line Thence East with his line to the Beginning Containing Fifty three and one half acres be the same more or less. To have and to hold the aforesaid Land with all and singular the right, profits, emoluments, hereditaments, and appurtenances, of in and to the same belonging or in anywise appertaining to the proper use and behoof of him the said Henry C. Williamson his heirs and assigns forever and the said Alfred Linnell for himself, his heirs, executors and administrators doth covenant and agree to and with said Williamson his heirs and assigns that he is lawfully seized in free of the aforementioned premises that the same are free from all encumbrances that he hath a good right to sell and convey the same to the said Williamson as aforesaid and that the beforegranted land and premises will warrant and forever defend deferred against the right title interest or claim of all and every person whomsoever.  In Witness whereof the said Alfred Linnell hath hereunto set his hand and affixed his seal the day and year above written, Alfred Linnell {Seal}, U. S. Revenue Stamps affixed $ 1.50  State of Tennessee} County of Dyer} Personally appeared before me Thomas H. Benton Clerk of the County of said County Alfred Linnell the bargainer above named, with whom I am personally acquainted and acknowledged the execution of the foregoing deed for the purposes therein contained. Witness my hand at office this 3 day of December 1866 TH Benton Clerk, State Tax $1.00 Paid.”  (Dyer County Deeds Book N, Page 469)  It is transcribed as written with grammatical errors.

The Wills of Robert & David Linnell