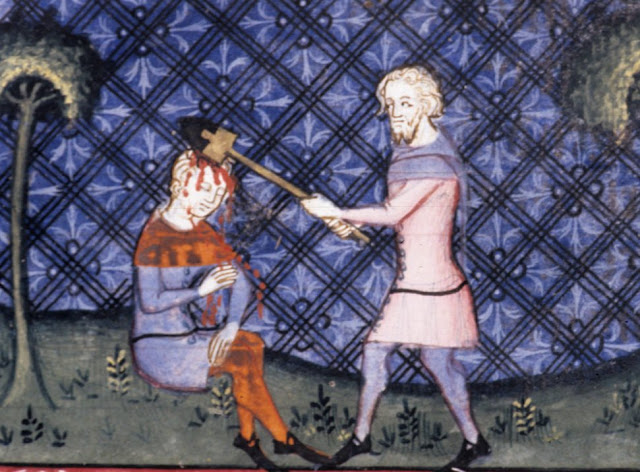 The office of coroner was established by lex scripta in Richard I's England. In September 1194, it was decreed by Article 20 of the "Articles of Eyre" to establish the office of custos placitorum coronae (Latin for "keeper of the pleas of the Crown"), from which the word "coroner" is derived. This role provided a local county official whose primary duty was to protect the financial interest of the Crown in criminal proceedings. The office of coroner is, "in many instances, a necessary substitute: for if the sheriff is interested in a suit, or if he is of affinity with one of the parties to a suit, the coroner must execute and return the process of the courts of justice. "This role was qualified in Chapter 24 of Magna Carta in 1215, which states: "No sheriff, constable, coroner or bailiff shall hold pleas of our Crown."  Richard Luvel, the son of Alexander Luvel was the lord of Farthingstone and Kislingbury. See Linnell History. 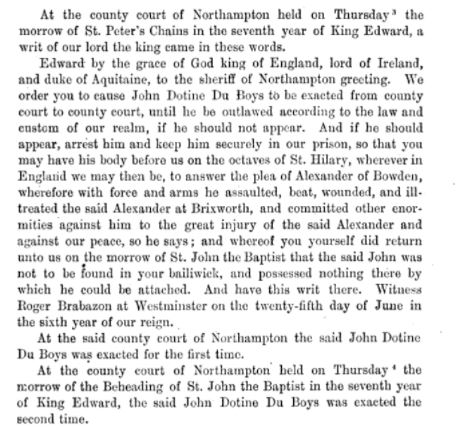 Geoffrey Omond de Stevinton confessed he was a thief before Richard Luvel coroner. He said that with Richard de Burton... stealing at Stevinton...at Wodeford juxta Thrapston at the hosue of John Killebellok de Wodeford...John & William Malyn. He says that with Richard de Burton they stole a cow in the fields of Aldwyncle. He appeals Richard Dilkes de Wodeford for harbouring him at Wodeford? He appeals Thomas Brabazoun for two pigs in the wood of (Gotisler). He appeals John Joce de Wodeforde. He appeals John le Smith de Risshenden, William le Northerne of the same, Hugh Box de Ashwell & John de Asshewell for taking steers at Barton Hanred. He appeals Thomas Knotte de Risshenden for taking a mare at Hecham Ferers, Roger ate Grene de Risshenden, John T__le of the same & William Fancous of the same. 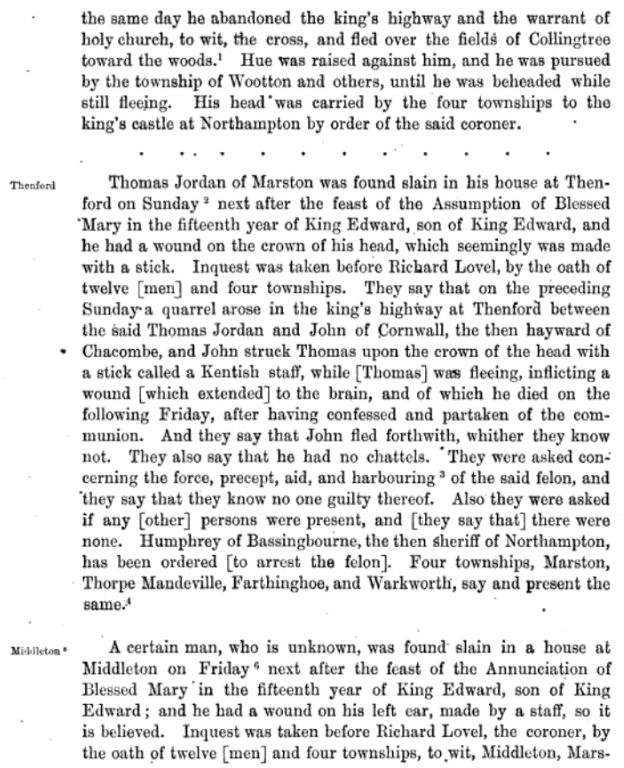 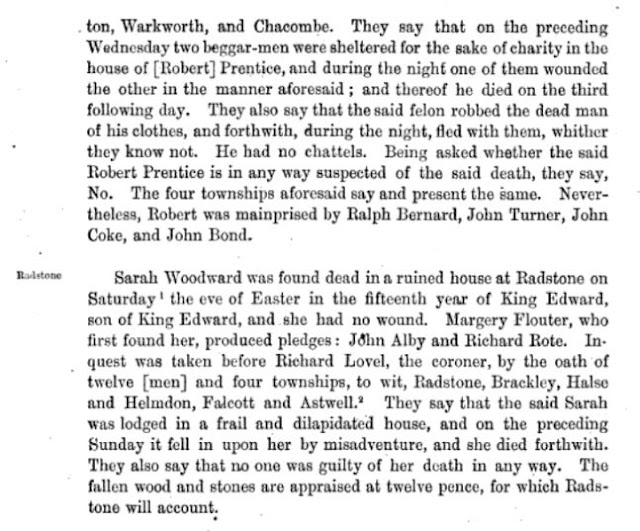 Nicholas le Swon de Rode confessed he was a thief before Simon de Keylmersh and Richard Luvel coroners. He said that with Nicholas Bonde de Feninstratford and Nigel de Burton super Trent he entered the house of Henry Spigurnel in Pokesle and carried off goods (listed). With Ralph Tinkere de Coten he stole two brass pots and ? at Hekeneye in county ___. With William Sikerbeche, William and Thomas sons of William de Hardingesthorne tooks 44 sheep at Dodington. With Walter son of Nicholas de Pedington latley in Haclington, William de (Bydoch) de Horton and William his son took 40 sheep at Abingdon near Northampton. With Robert Janekyn de Rode he took a cow at S___. With John Rawour de Peuelespery and William Pecus of the same he took 2 steers at Kedlington in county Oxford. With Reginald Smith de Cottenale...With Henry son of Sarre Smith de Potterspery deprived a merchant of his goods worth 40 shillings and more? With John de (Exoma) he took 3 sheep juxta Stowe..the house of John Plocman at Stokebrewere. He said he stole a cow at Banbury. 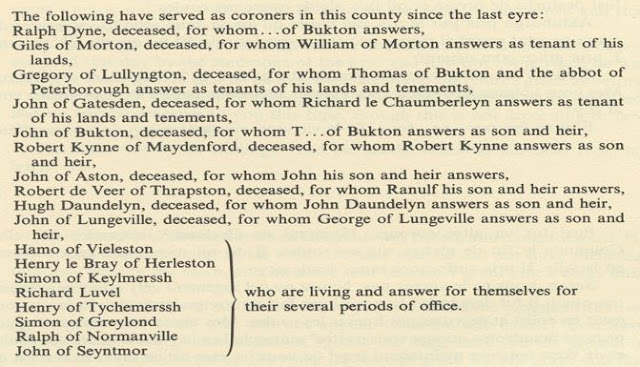 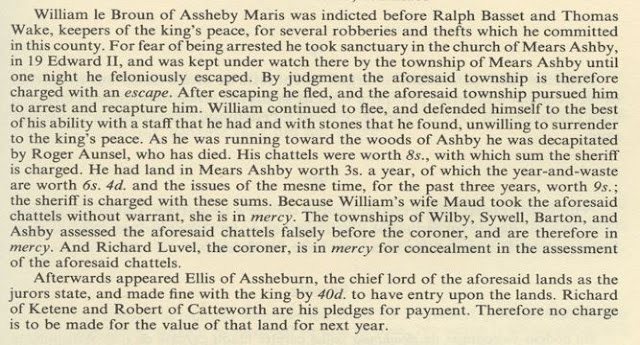 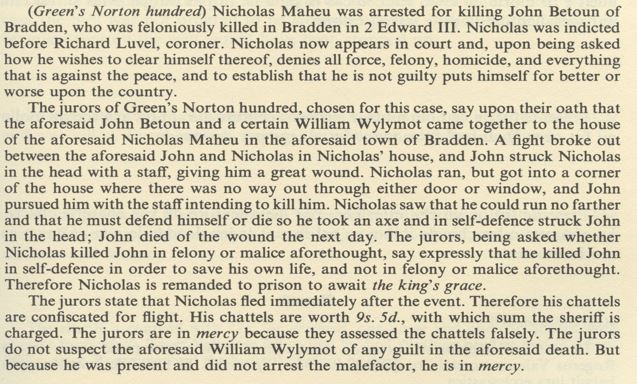 1348 22 Edward III
Christina de Stoke of Ashby St Ledgers states that on the Sunday before the feast of St Matthew certain malefactors came with force and arms, broke into the house of her husband, Seman de Stoke, and attacked and killed him. She can have no justice because of their threats and because of the maintenance of the Sheriff. She requests a commission to justices and to Richard Luvel and Thomas de Wenlok to inquire into these malefactors, at the King's suit as well as that of the party, and to send those who are found guilty to the Tower of London to answer and stand at common law.
.
Sources
- The Publications of the Selden Society. Select Cases From the Coroners' Rolls A.D. 1265-1413, United Kingdom, Selden Society, 1896. pgs. 63, 75-77
- The Eyre of Northamptonshire: Edward III A.D.1329-1330. N.P., Selden Society, 1983. two Volumes. pgs. 11,172, 184, 237, 523
- http://www.medievalgenealogy.org.uk/ ABSTRACTS OF CORONERS' INQUESTS IN NORTHAMPTONSHIRE: INDEX,  by Stephen Swailes Link
-  AALT Law, Documents from Medieval and Early Modern England from the National Archives in London Just 2 109, Just 1 633, Just 1 635
- SC 8/239/11915 The British National Archives
- Calendar of Patent Rolls, Edw III, vol. VIII, 1348-1350, (Public Record Office, 1905), p.81