The Jonathan Linnell 11a, b1 Mystery Solved


When Rachel Linnell Wynn published her book, The Descendants of Robert Linnell in 1985, she collaborated with Arthur E. Linnell (11a,b12,719).   Unfortunately, Arthur’s own line has never been proven or connected to Robert Linnell.  Jonathan Linnell’s (11a,b1) ancestry had perplexed Arthur E. Linnell for over 50 years and he had even published an ad for any information in 1904.  If you look at the evidence that Rachel and Arthur presented in pages 89-92 [1], it was remarkable the detail and sources they had before the advent of the internet.  What I will try and do is present the facts with new information and records that have come to light, with an unbiased approach that can help link the (11a,b1) line of Jonathan Linnell jr. b. abt. 1723 d. 1797 to Jonathan Linnell (117,5) b. 1701 who married Abigail Phinney.
What do we know about this Jonathan Linnell jr. (11a,b1) from actual records?  Jonathans’ Tombstone is inscribed “In memory of Mr. JONATHAN LINNELL who departed this Life June 9th 1797 in the 74th Year of his Age” [2] This is supported by the Bill of Mortality Records in the South Parish of Eastham “1797 Jona Linnel” [3] From this we can deduct that Jonathan was born about 1723.  Jonathan was married three times 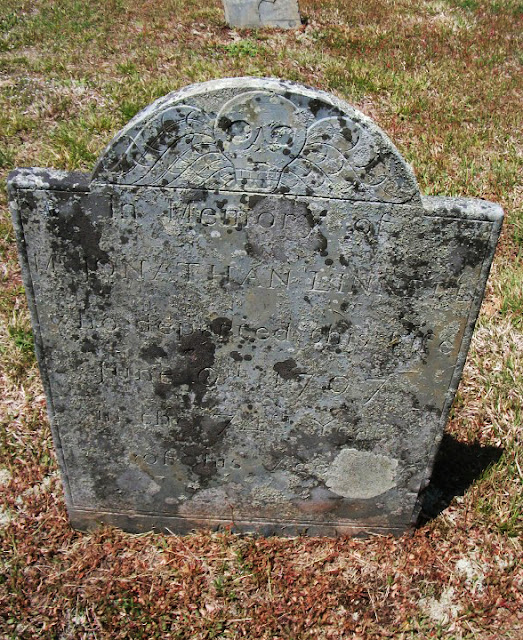 Below are transcripts of Intention and Marriage records for Jonathan’s three marriages.

From the five records we can easily establish that Jonathan Linnell jr. was more than likely a son of another Jonathan Linnell.   This assumption is not always the case because in colonial times jr. , sr. , and 3rd were sometimes used to separate living individuals with the same name, jr. being the younger, sr. the elder, 3rd the youngest. These individuals could be an uncle, cousin, or even an unrelated individual, but for all practical purposes was used to designate father and son. [11] In Rachel Wynn’s book it was shown that Arthur E Linnell was relying on the writings of Amos Otis.  Specifically, numbers 23, 32, 33, and 34. in the Linnell line. [1]   To help explain the confusion let us look at it visually 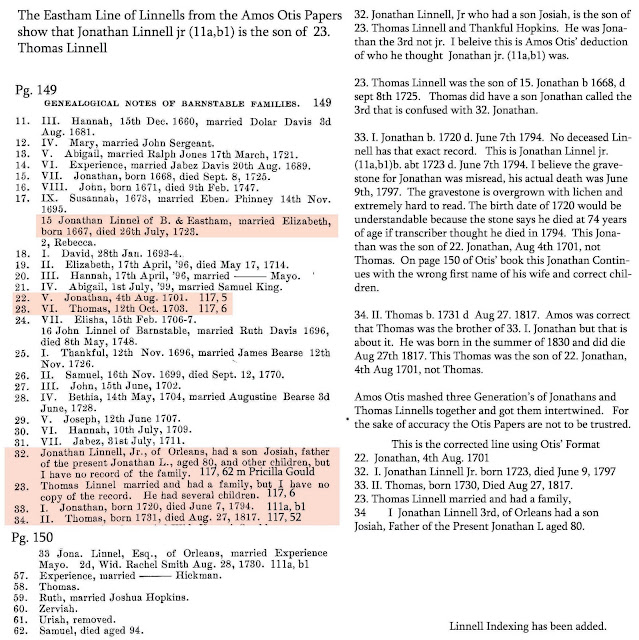 After reviewing the Amos Otis papers, I feel it is better to disregard the information as a genealogical source and just use them just as a reference.

From the marriage record of Jonathan and Abigail we can conclude a couple things.  First Jonathan (117,5) used the jr. moniker in 1723 that designated he was the son of another Jonathan Linnell (117). Second Jonathan jr. (11a,b1) was either born out of wedlock or son of an unknown 1st wife of Jonathan jr. (117,5).

Jonathan jr. (11a,b1) used his father’s name, owned land as Yeoman in Harwich [18],  and was called “Mr.”[10]  so the idea he was illegitimate seems less likely.  Jonathan jr. (11a,b1) was not mentioned in his fathers will when he died and if he was illegitimate he would not be able to inherit land according to Massachusetts law.  According to Jonathan’s (117,5) will his house in Eastham was split up into thirds with his wife Abigail and his sons Heman and Thomas.  The will also mentioned daughters: Elizabeth Rogers (Linnell), Abigail Knowles (Linnell), and Hannah Cole (Linnell); granddaughter, Ellis Mayo, and grandson Theophilius Mayo getting part of the estate.  Thomas and Heman were assigned as executers and witnesses were Jonathan Linnell 3rd and Elkanah Linnell nephews of Jonathan (117,5) and sons of his brother Thomas. [19]
Jonathan (11a,b1) probably was not mentioned in the will because he was 54 years of age and better off than his half-siblings.  He likely still had land in Harwich and possibly Eastham which he may have already received from his father (Jonathan 117,5), had received a considerable amount of land from Jonathan Linnell b. 1668 (117). [20]   In 1771 Jonathan jr. had 20.5 acres of land, 1 Horse, 2 Cows, 7 Goats and 2 Pigs in Harwich. [21] and church records show Jonathan jr. had moved back to Eastham by May of 1774. [22]  In 1790 Jonathan jr. was listed In the Eastham Census living next to Samuel, Elkanah, and his son Uriah Linnell. [23] 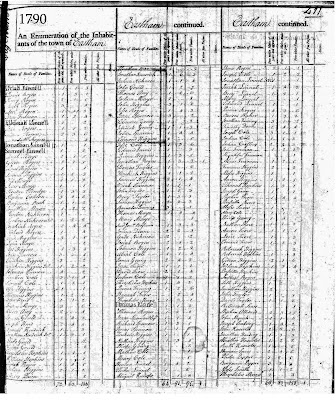 To help prove these statements we need to review four pieces of solid evidence.

This parishioner list distinctly shows a clear separation between the Jonathans and their corresponding monikers on the same record.  Jonathan Linnell jr. (11a,b1) who is married to Rachel (Huggins) is the son of Jonathan Linnell (117,5) who married Abigail (Phinney).  This list does not use the moniker “sr.”  as a designation and there are many other “jr’s” listed with other families with their fathers.  If you look back on how Jonathan (117,5) son of Jonathan (117) and Elizabeth used the jr. moniker with his marriage to Abigail Phinney, you would think that would be passed to the next generation.

(2) In 1996 Robert P Smith, Ph D. transcribed the records of the Federated Church of Orleans, Mass. with records starting in 1772.  This church, located on Main Street in South Orleans is a member of the United Church of Christ.  It was formed as the Federated Church when the local Congregationalist and Universalist Churches combined. Interestingly, at one time they excommunicated members for attending Universalist services. In his transcriptions, Dr. Smith has a record of the marriage of Jonathan Linnell jr. and Tabitha Hurd both of Eastham on Sept. 7th 1775. His notes designate the parents of the newlyweds to be “Son of Jonathan and Abigail (Phinney) Linnell; Daughter of Thomas and Mary Crosby”.  We know from the marriage records of Jonathan and Abigail that Jonathan jr. was born before their marriage date. [10]

(3) In the write up of Stephen Hopkins in the Mayflower Families Fifth Generation Descendants by John D Austin F.A.S.G.  The author has “Rachel Hopkins widow of Dean Smith married in Harwich August 28th 1760 to Jonathan Linnell son of Jonathan and Abigail (Phinney) Linnell”.  Again, We know from the marriage records of Jonathan and Abigail that Jonathan jr. was born before their marriage date. [24] 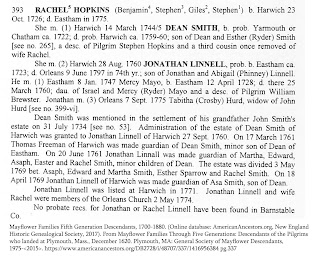 (4) In 1905, The Genealogical and Biographical Record of New London, Conn was published.  Inside this large book is a biography of the Linnell family from written by Dr. Edward H Linnell b. Sept. 15th 1853 in East Douglas, Mass.  The line of descent shows the author, all the way to his GG Grandfather, Jonathan Linnell jr. (11a,b1) to Robert Linnell.  Dr. Linnell studied in Germany, London, and Vienna and became a medical Dr. of various disciplines.   He was also a writer and contributor of various scientific articles and publications and even wrote textbooks and was still living at the publication of the biography.  One must assume that Dr.  Linnell was detail orientated and a trustworthy source of information. Dr. Linnell’s father, Jonathan Edwards Linnell was born in Orleans, Massachusetts in 1822 to Jonathan Linnell b. 1789 son of Uriah.   Personally I believe this to be the best source of ancestry because the authors living family was only a generation away from Jonathan jr.(11a,b1) and probably had a family bible with records or an accurate oral record. [25] 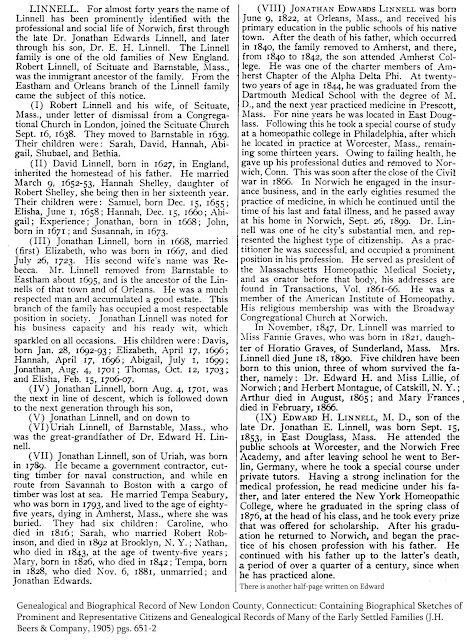