Rufus B. Linnell was the second son of  Samuel Linnell and Eunice Mosher and was a settler of the Warren Settlement in what was then called, Lyme Township.  Rufus was one of the earlier converts to the Mormon Faith and moved from Clayton, Jefferson County, NY to Phoenix Township, Henry Co. Illinois, sometime before May 1844.  He came in a wagon and buggy with three good horses.  During the journey the buggy gave out in Ohio and upon his arrival in Henry County, he exchanged a horse for a cooking stove and 10 bushels of corn. He located on section 1 of Township 17, cleared the land and built his house.

Rufus' wife Lucy's' surname has always been listed as Mellville.  In April of 2017, I was contacted by a descendant of Rufus who had multiple Ancestry DNA matches with a family named Melvin.  In the Portrait and Biographical Album of Henry County, Illinois pgs. 644-645, it states that "Rufus B Linnell married Lucy Mellville. She was born in Oneida Co, NY, Feb 10th 1807" After searching a few Census records it was narrowed down to the family of John Melvin and Polly who lived in Oneida Township, NY in 1810 and Volney, Oswego County, NY. in 1820. Oswego County was created in 1816 from parts of Oneida and Onondaga counties.

According to Ancestry.com records this family had a list of names that seemed promising. Normally other trees from Ancestry.com should be researched before jumping to conclusions, but one of the names struck me, the unusual name of Persie.  Rufus B, Linnell and Lucy had a daughter named Persie born in 1843. With the Melvin DNA matches and the Persie connection I felt that this was a strong possibility that this was Lucy's family, but one strong piece of evidence was missing to link everyone together.

That evidence arrived in the form of birth records beautifully scribed in pre-1900's ink, possibly torn out of a bible.  The birth records came from a descendant of Mary B. Linnell 118,241,143,2 and James Searle.  Mary, was the grand-daughter of Rufus B Linnell and Lucy Melvin through their son Rodney E. The birth records are below next to the screenshot of the probable family that was taken from Ancestry.com in 2017. 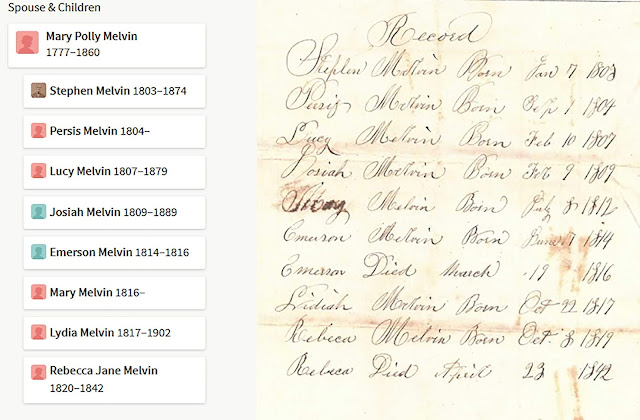 We can now safely say that Lucy Melville is Lucy Melvin, daughter of John and Polly Melvin of Oneida/Oswego NY.