Samuel Linnell was the eldest child of David Linnell born around Dec 15th, 1655.  He was often mistaken for his uncle, Shubael, Son of Robert Linnell and Peninna Howse who is mentioned in the will of Thomas Ewer in 1667. (Amos Otis, Genealogical Notes of Barnstable Families Vol 1 (1888) pg. 362). This is where the Ewer/ Robert Linnell/Sarah Larned error came from and how scholars estimated Robert’s birth at about 1584.  Samuel died sometime after 1733 possibly in Gorham, Maine where he received a grant of land for his service the war as a “Narroganset Soldier”  (Hugh Davis McLellan, The History of Gorham, Me (1902) pg. 28)

The 1675 conflict with the Indians known as King Philip's War had resulted in more deaths relative to the size of the population than any other war in American history. Before the European settlement of southern New England, the Narragansett tribal government was the sovereign authority over their people and their general welfare. They educated their children, cared for their sick, and fished in the bay that now bears their name. In 1675 their way of living would come to an end.

The war was the greatest calamity to occur in seventeenth-century New England and is considered by many to be the deadliest war in the history of American colonization. In the space of little more than a year, 12 of the region's towns were destroyed and many more were damaged, the economy of Plymouth and Rhode Island Colonies was all but ruined and their population was decimated, losing one-tenth of all men available for military service. More than half of New England's towns were attacked by Indians.

Carefully preserved in the special collections of the American Antiquarian Society in Worcester, lies a fragile document vital to our understanding of Peirce’s Fight.   Dated March 27, 1676, it is the actual letter written by Reverend Noah Newman one day after the battle and carried by horseback messenger to Reverend John Cotton in Plymouth. (From Wikipedia and various sources)

The following is a summary written by Joe Doherty called “Blood on the Blackstone, Part 5 - Escape From Peirce’s Fight” 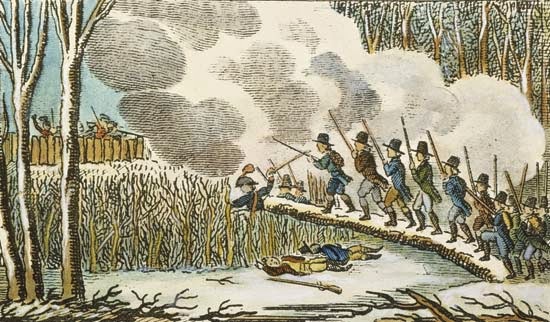 But Reverend Newman did not have the last word.    After the letter left his custody, someone, probably the recipient, Reverend John Cotton, made corrections to the document.   Two of the names – “Sam Lennet” and “John Mathews” -- were underlined and a handwritten note added, which reads:  Since the writing of this letter John Mathews & Sam Linnit are found alive ...

Samuel Linnell (also spelled Linnet or Lennet) of  Barnstable was 20 years old when he joined Captain Michael Peirce’s regiment.   How this young man bore up under fire during the battle is not a matter of record but we can guess that his youthful strength and reflexes served him well – after all, he escaped the field of combat with his life while nearly every man around him perished.

Linnell did not come away entirely unscathed, however – he had a close brush with a musket ball, and this we know from a deposition given by one Ebenezer Goodspeed on November 13th  1742, 64 years after Peirce’s Fight: “Sam’l Linnell was out in Pearces Fight, so called and he and the said Sam’l Linnell was the only English man of Barnstable that returned from that fight, and he showed me his hat where it was shot through after his return from said Pearces Fight.”  Given the great span of years, Goodspeed was probably just a boy when Sam Linnell came back to Barnstable larger than life and impressed him with his bullet-riddled hat.

It is worth observing that a hat “shot through” figures prominently in two of the stories associated with survivors of Peirce’s Fight.   Whether the two stories might have a common origin -- for example, was it really Sam Linnell who outfoxed his would-be assassin with the hat trick but was recast as a friendly Indian in later versions of the story? -- is anyone’s guess.

In 1733, at the age of 78, Samuel Linnell received a grant of land as payment for his service in Peirce’s Fight.   That land, part of what was known then as Narraganset Township No. 7, Lot 89, was situated in what is now Gorham, Maine.

John Mathews likewise received a land grant in Narraganset Township No. 7.   We know little of Mathews’ background or service except that he too hailed from the Cape and was one of five men recruited for the Peirce expedition from the town of Yarmouth.  Mathews, Henry Gold and the three Gage brothers --  John, Will and Henry – had all marched off to Rehoboth together.  Only Mathews came back alive.

Reverend Newman listed both Linnell and Mathews men as “slaine,” yet together with Thomas Man, they boosted the number of confirmed English survivors of Peirce’s Fight to three.   But were there more?   There is a cryptic line in Reverend Newman’s letter which hints at that intriguing possibility: “The account of theire names is as follows: From Scituate 18 of wch 15 slaine …,” etc.

Was the Reverend stating that Scituate had supplied 18 soldiers but he could confirm only 15 of them as dead?   What became of the other three?    An alternate interpretation is that 18 men from Scituate had been killed but only 15 could be positively identified – however, this explanation seems unlikely, because it would raise Newman’s stated total of 52 English killed to 55.

We will probably never learn exactly what Mr. Newman intended by those words, just as we may never be able to explain how or why he mistakenly counted Samuel Linnell and John Mathews among the dead – and all for the same reason: we don’t know what intelligence he had at his disposal when composing his list of casualties.